CORVID 19 Delivery Times Update
Delivery of this item is unaffected and will take our usual 5 - 7 working days for UK orders. Your order will be packed by our workers safely from isolation at home with orders collected in bulk directly by Royal Mail on Tuesday & Friday.
More Info / Statement on Corvid 19
SKU: REV162LP Categories: World Be Free, Band Merch, Vinyl LP

In our minds and in our hearts… With a love and appreciation for classic hardcore music and the intent to create something new and refreshing, WORLD BE FREE was formed. During the fall of 2014 Scott Vogel (TERROR/BURIED ALIVE), Joe Garlipp (ENVY), Andrew Kline (STRIFE), and Sammy Siegler (JUDGE/CIV/RIVAL SCHOOLS) joined together to start WORLD BE FREE. The band set out with the goal of making music that was more melodic and positive than what some were used to playing. Music that wasnt just about being the toughest or the angriest and where it was OK for guys and girls to sing along and smile. They worked on crafting a sound that leaned heavily on the inspiration of the classic hardcore and punk albums they all grew up on, while adding a modern twist that kept it new and fresh. The band went right to the studio to hit record. The idea was to capture some energy, keep the good mistakes, and commit to full takes as much as possible, like many of the older hardcore albums WORLD BE FREE was referencing. Scott delivered the vocals later, working daily with Nick Jett (drummer of TERROR) at his studio in Granada Hills, CA. Once the album was complete, the stars aligned, and the band was able to secure a guest appearance from Walter Schreifels (RIVAL SCHOOLS, QUICKSAND, GORILLA BISCUITS) on the song Im Done. The name World Be Free was inspired by the basketball player Lloyd Free, who changed his name to World B. Free in 1981. He was quoted as saying, Ill say what Im going to do, and then Ill go out and do it. Hes a total badass with a mission statement that we can all get behind, and honestly, who doesnt want the world to be free? When it came time to create album artwork, the idea was to make something fresh, fun and unique to the era, pulling a little from Schoolhouse Rock with early MURPHYS LAW and GORILLA BISCUITS as well as hand-drawn show flyers from the 80s. Andrew reached out to his friend Linas Garsys to work on some concepts. After a few revisions, the artwork was ready to go. While there was some interest from a few different labels, these five knew that Revelation Records was the right choice all along. The songs are new, the band is new, but its nice to partner with some old friends at Revelation who were responsible for releasing some of the most classic hardcore albums to date. While these five are still active in TERROR, GORILLA BISCUITS, STRIFE, JUDGE and other bands, WORLD BE FREE is very much a priorityincluding playing live in 2016 in support of their debut release The Anti- Circle. 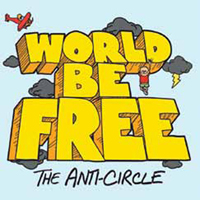 You're viewing: World Be Free The Anti-circle Vinyl LP £20.99
Add to basket