Originally conceived and executed as a one-man project by Tom Pimlott on the banks of the Mersey River in Liverpool, England, VIOLENT REACTION recorded a demo in 2011, an EP in 2012 and an LP for Painkiller Records in 2013. Soon after Tom
relocated to Leeds to assemble a full band with an end result that finds the lads playing straight edge hardcore punk with an obvious Oi! influence. With a lengthy American tour with their brother band THE FLEX under their belts, VIOLENT REACTION is set to make their Revelation Records debut with Marching On. 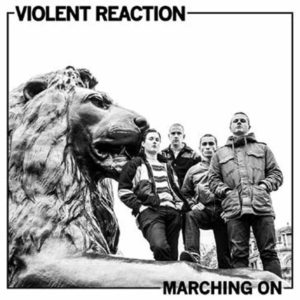 You're viewing: Violent Reaction Marching On CD £14.99
Add to basket