CORVID 19 Delivery Times Update
Delivery of this item is unaffected and will take around 5 - 10 working days for UK orders (although there may be delays with Royal Mail). Your order will be packed by our workers safely from isolation at home with orders collected in bulk directly by Royal Mail on Tuesday & Friday.
More Info / Statement on Corvid 19
SKU: MKD14 Categories: Uniform Choice, Band Merch, Vinyl LP

For the first time ever on the 12 vinyl format is the 1984 demo by Orange County, California straight-edge hardcore stalwarts Uniform Choice. It features Patrick Dubar on vocals, Victor Maynez on guitar, David Mellow on bass, and Patrick Dyson on drums, the same line-up that would later go on to record the lauded Screaming For Change LP. Originally released in very limited quantities on cassette and later reissued as a double-7/CD on Nemesis Records in the early-90s, this is the first official re-pressing of this release in decades. This deluxe reissue includes a gatefold jacket featuring restored cover artwork, never-before-scene photos, a reproduction of the original demo lyric sheet, and a two-sided, 12 x 18 poster with a photo by famed SoCal punk photographer KRK on one side and rare artwork by Shawn Kerri (Circle Jerks, D.O.A., Germs) on the other. 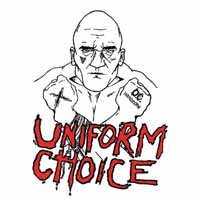