CORVID 19 Delivery Times Update
Delivery of this item is unaffected and will take around 5 - 10 working days for UK orders (although there may be delays with Royal Mail). Your order will be packed by our workers safely from isolation at home with orders collected in bulk directly by Royal Mail on Tuesday & Friday.
More Info / Statement on Corvid 19
SKU: SIXONE110CD Categories: Typesetter, Band Merch, CDs

Formed in 2012 by longtime friends, Marc Bannes (vocals, guitar), Alex Palermo (bass, vocals), and Kyle McDonald (guitar,vocals), TYPESETTER quickly became regulars on the DIY touring circuit and began building a catalog of tuneful, yet gritty songs over multiple EPs and their 2014 debut full-length, Wilds End. As the bands lineup evolved, so did their sound, and with the additions of Sarah Bogosh (keyboards, trumpet, vocals) and Matt Gonzalez (drums), a colorful new wash of atmosphere and dynamics began to saturate the bands anthemic punk.
On “Nothing Blues”, TYPESETTER dive headfirst into this new territory, with Palermo and Gonzalez providing the driving rhythmic backbone for Bannes and McDonalds walls of shimmering reverb and distortion, while Bogoshs synths add a dreamy flourish rarely heard in tandem with the directness of punk. This eclectic mix of tones and textureseven a bit of trumpetcould be a recipe for sensory overload, but the band deftly makes room for ambitious arrangements while maintaining the unbridled momentum at their core. 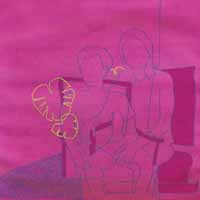 You're viewing: Typesetter Nothing Blues CD £11.99
Add to basket