CORVID 19 Delivery Times Update
Delivery of this item is unaffected and will take our usual 5 - 7 working days for UK orders. Your order will be packed by our workers safely from isolation at home with orders collected in bulk directly by Royal Mail on Tuesday & Friday.
More Info / Statement on Corvid 19
SKU: PIR199CD Categories: The Ratchets, Band Merch, CDs

THE RATCHETS want you to know that theyve rolled back into town. Guitars in tow, their new record First Light in hand, theyre ready to continue pushing their musical boundaries to deliver on their unique brand of punk that fans have come to know and love. This album is fresh, full of hooks, artful lyrics, and politically, with everything going on in the world – is just on-point. Following the release of Glory Bound (Pirates Press Records first LP) in 2006, THE RATCHETS were hailed by many as an integral part of the answer to a world without THE CLASH. With this album, THE RATCHETS show us that theyve been carving their own path this whole time, somewhere between the real world and the stuff of rock and roll dreams. 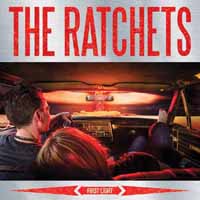 You're viewing: The Ratchets First Light CD £11.99
Add to basket