CORVID 19 Delivery Times Update
Delivery of this item is unaffected and will take our usual 5 - 7 working days for UK orders. Your order will be packed by our workers safely from isolation at home with orders collected in bulk directly by Royal Mail on Tuesday & Friday.
More Info / Statement on Corvid 19
SKU: PPR257LPB2 Categories: The Old Firm Casuals, Band Merch, Vinyl LP

Originally released by Oi! the Boat (U.S.A.) and Randale Records (Europe) in 2014,This Means War is THE OLD FIRM CASUALS debut LP. This incredible album really showcases the explosive burst onto the scene that this band made – and created something permanent and timeless to show the importance of this band to the world of streetpunk & Oi!. Taking a few songs from previously released (and highly acclaimed) singles, and elevating them by sandwiching them together with new tracks, this record became a fan favourite quickly. With its original pressings now out of print, Pirates Press Records is proud to re-issue this integral record, globally, adding a few extra finishing touches in the process. Two versions are available: gold and silver. The gold vinyl is housed in a jacket printed on gold foil (the snake design), and the silver vinyl is available in a jacket printed on silver foil (the Wolf design). This album also includes the bonus track Watford Tuxedo which appears after a locked groove on the B-side. Go get em folks – these are truly a must have for any punk rock vinyl collector! 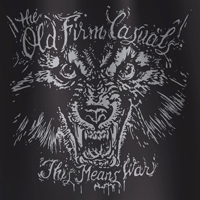