The Masonics Royal And Ancient CD

CORVID 19 Delivery Times Update
Delivery of this item is unaffected and will take our usual 5 - 7 working days for UK orders. Your order will be packed by our workers safely from isolation at home with orders collected in bulk directly by Royal Mail on Tuesday & Friday.
More Info / Statement on Corvid 19
SKU: CPWL109CD Categories: The Masonics, Band Merch, CDs

The Masonics Royal And Ancient CD

Anyone who has even a passing interest in garage and beat music of the last 25 years will have come across the names of Thee Headcoats, The Milkshakes, The Clique, The Delmonas, The Kaisers or The Wildebeests. The three members of the devilishly stylish Masonics all spent time in at least one of those legendary bands and in more recent years came together to form a veritable super group of the British rock nroll scene. Combining their previous bands sixties beat, US garage and instrumental stylings with a punk rock attitude, this is a group that pays attention to detail, with a talent for songwriting coming to the fore. Micky Hampshire (guitar/vocals) possesses a merciless instinct for touching, simple, timeless rock nroll melodies and lyrics. The band performs with verve and precision, on record and on stage, always giving their followers their moneys worth. Bruce Brand pounds the traps like it could save your life  and sometimes I believe it very well could! John Gibbs twangs the bass strings with a gut instinct, taking you into a groove with grit and gumption. Six albums down the line ( Royal and Ancient being their seventh) The Masonics remain more hard-hitting and vital than any group of teenage hopefuls on the scene  of that theres no doubt. 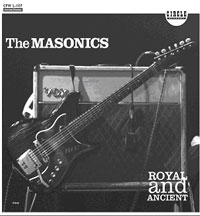 You're viewing: The Masonics Royal And Ancient CD £11.99
Add to basket