New Knives is the sharp object that the two swedes are throwing at you in 2020. The album is released on Swedish label Heptown Records.

The Guilt are defending their stronghold of highly energetic electro-punk rock a.k.a lazer punk with their second album.

Emma (vocals, sounds, knives) and Tobias (vocals, sounds, guitars) have been annoying the general public since 2012. Currently residing in Malmö, Sweden, this duo still catches most of their inspiration on the live scenes of Europe.

The new album promises simpler, dancier, quirkier. However, looking at the song titles, this duo also seems to be angrier than before. Titles like Enemy, Nobody Likes You, I have no invitation and New knives- is it a reflection of them growing older and more bitter?
These are songs about making knives, about having a job, about yeast infections and about vengeance. So, this second album has been infused by the bands questionable sense of humour, both in lyrics and in sounds.

The New knives was mixed in Malmö by Joakim Lindberg, Studio Sickan, known for his skills in magic and carving out a fresh but gritty sound. This approach goes well with the new songs. The idea was to create a direct sound with a strong emphasis on clean cut melodies and a pumping synth bass line. Simple and possibly stupid, it will provide you with the dancing and the screaming you need in your life.

The Guilt invites you to join their very, very, violent disco. 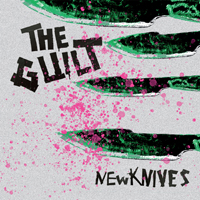 You're viewing: The Guilt New Knives CD £13.99
Add to basket