CORVID 19 Delivery Times Update
Delivery of this item is unaffected and will take our usual 5 - 7 working days for UK orders. Your order will be packed by our workers safely from isolation at home with orders collected in bulk directly by Royal Mail on Tuesday & Friday.
More Info / Statement on Corvid 19
SKU: LETV131LP Categories: The Exploited, Band Merch, Vinyl LP

Let’s Start a War, or Let’s Start a War… (Said Maggie One Day), is the third album by the punk band The Exploited, released in 1983 through Pax Records. The title refers to Margaret Thatcher’s decision to go to war over the Falkland Islands in 1982, suggesting that she did so almost on a whim.
DELUXE VINYL EDITION!!!!
Features BONUS TRACKS 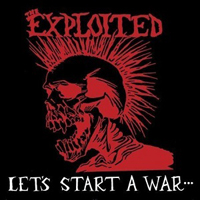 You're viewing: The Exploited Lets Start A War Vinyl LP £15.99
Add to basket