After 43 years, Hoorahland is The Cravats totally in control of where they want to be sonically. A polished progression from 2017’s critically aclaimed Dustbin of Sound album. We all inhabit Hoorahland. It’s the great bemusement park in your head and what Walt would have wanted. We never leave. Trapped by its turnstiles, looping the loop of uncertainty for eternity or, at least, until the Chessington World of Dementia kicks in and brings blissful release. Oh, and Jello Biafra duets with The Shend on Now The Magic Has Gone, a song about two ageing theatre queens whose everlasting love has tragically fragmented into a thousand shards of bitter hate. It’s a tango.
You what? 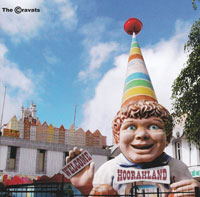 You're viewing: The Cravats Hoorahland CD £8.99
Add to basket