CORVID 19 Delivery Times Update
Delivery of this item is unaffected and will take around 5 - 10 working days for UK orders (although there may be delays with Royal Mail). Your order will be packed by our workers safely from isolation at home with orders collected in bulk directly by Royal Mail on Tuesday & Friday.
More Info / Statement on Corvid 19
SKU: FAT754CD Categories: Swingin Utters, Band Merch, CDs

Over the past year street punk legends SWINGIN UTTERS tested the known limits of building anticipation. In early 2010, to the delight of fans, the UTTERS ended a 7 year drought by entering the studio and recording a brand new full-length record titled Here, Under Protest.

As expected, with such a lengthy stretch between albums the excitement over this news was profound. After initially laying down the tracks, numerous factors including a relentless tour itinerary throughout 2010, studio scheduling conflicts, a bout of perfectionism, and varied spurious reports of different release dates, combined to create an expectation level of Chinese Democracy-like proportions. The good news is, unlike the inevitable and colossal letdown of Chinese Democracy (sorry, Axl), this story actually has a happy ending. Here, Under Protest unanimously delivers on every bit of the anticipation, even more, it surpasses it.

Comprised of 14 tracks Here, Under Protest drips with the signature punk revival/country/Irish folk sound that has sustained SWINGIN UTTERS as one of the most successful independent punk bands of their time. As always the song structures on each track reflect the UTTERS advanced degree of musicianship through a fabric of clever guitar work, well timed hooks, and captivatingly interwoven vocal melodies. Of course all of this is tempered with the grit and edge the band has always been known for. As is custom for the UTTERS, the album features alternating vocalists (Johnny, Darius, and Spike), but this time around theyve added the fluid lead vocal abilities of guitarist Jack Dalrymple (famous for his work in One Man Army and Dead To Me) to the mix. From top to bottom every song on Here, Under Protest is unique, memorable, and exhilarating, and as a collection the album proves to be, dare we say it, well worth the wait. 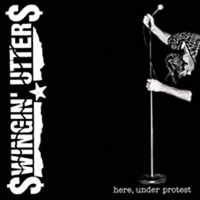