CORVID 19 Delivery Times Update
Delivery of this item is unaffected and will take around 5 - 10 working days for UK orders (although there may be delays with Royal Mail). Your order will be packed by our workers safely from isolation at home with orders collected in bulk directly by Royal Mail on Tuesday & Friday.
More Info / Statement on Corvid 19
SKU: B9R174CD Categories: Strike Anywhere, Band Merch, CDs

Legendary melodic punk rockers Strike Anywhere have pieced together a live acoustic collection, titled In Defiance of Empty Times, that is set to be released on August 14th from Bridge Nine Records. Two sets were recorded last year, in Rochester in July and Richmond in September, and merged together for this very special release. “Side Rochester” features six songs captured from Strike Anywhere’s acoustic performance alongside labelmates Polar Bear Club, while “Side Richmond” was recorded during a benefit show for the IWW on the eve of the Occupy Movement in RVA. This album follows the release of Strike Anywheres landmark album Iron Front, which was released on Bridge Nine in October of 2009 and called “the band’s best output to date” by Punknews.org. Since then, Strike Anywhere has toured the globe numerous times over and will be playing shows in support of In Defiance of Empty Times. 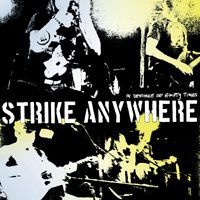 You're viewing: Strike Anywhere In Defiance Of Empty Times CD £4.99
Add to basket