SPOILERS have over the past couple of years established themselves as one of the most promising new bands on the underground punk scene. Supporting tours with the likes of FACE TO FACE and SNUFF last year (and more to follow again this year with LAGWAGON and BAD COP BAD COP) mean that they are gaining new fans wherever they play. With this in mind, RECENTLY RE-RELEASED is a limited CD compilation featuring their now out of print STAY AFLOAT debut mini LP, plus split 7 EP tracks, and also one previously unreleased studio track and three acoustic tracks to compile the story so far. Released to co-incide with the bands first ever Canadian dates with FACE TO FACE and more UK shows with SNUFF this year, this limited edition CD is to act as a taster for their debut album due later in 2018! 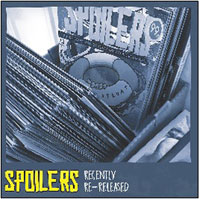