CORVID 19 Delivery Times Update
Delivery of this item is unaffected and will take our usual 5 - 7 working days for UK orders. Your order will be packed by our workers safely from isolation at home with orders collected in bulk directly by Royal Mail on Tuesday & Friday.
More Info / Statement on Corvid 19
SKU: FLS17086 Categories: Spizzenergi, Band Merch, Vinyl 7"

SPIZZENERGI, formed in the late 1970s, is an English punk/new wave band led by vocalist / guitarist Spizz. The band changed its name every year, subsequent names including Athletico Spizz 80, Spizzoil and The Spizzles. They are notable as the first band to top the newly created UK Indie Chart early in 1980 with their single “Where’s Captain Kirk?” .  It was included in the NME Writers 100 Best Indie Singles Ever in 1992 and more than two decades after its release, it was included in Mojo magazine’s list of the 50 best punk rock singles of all time. Old boys include Lu Edmunds (The Damned/P.I.L), Clive Parker (The Members/Big Country) and Glen Matlock (Sex Pistols/Rich Kids) and needless to say that the band has supported most of the iconic punk bands and headlined many tours/gigs including the 40th Anniversary of the 100 Club punk festival, Rebellion and Undercover punk festivals in 2016. To carry on with the 40th Anniversary of punk theme, SPIZZENERGI are now releasing this re-recorded, remixed single taken from their debut album. The release will be supported by a tour and various interviews/features in the music press. The machines are coming! SPIZZENERGI are coming! 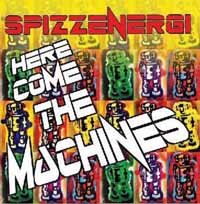