CORVID 19 Delivery Times Update
Delivery of this item is unaffected and will take our usual 5 - 7 working days for UK orders. Your order will be packed by our workers safely from isolation at home with orders collected in bulk directly by Royal Mail on Tuesday & Friday.
More Info / Statement on Corvid 19
SKU: MCR266 Categories: Septic Tank, Band Merch, Vinyl 7"

Septic Tank is a band created by Cathedral/Repulsion members Scott Carlson, Lee Dorrian and Garry Jennings back in 1994. It evolved out of a jam at a Cathedral rehearsal in a line-up which then also featured former Trouble drummer Barry Stern (RIP) . The night before said rehearsal, the guys had been up into the early hours drinking heavily, whilst ploughing through a box of Dorrians 7″s, which included such artists as Mob 47, Crude SS, Anti-Cimex, Deep Wound, Lip Cream and Outo to name but a few. With raging hangovers they blasted through a dozen or so songs that were all made up on the spot. Unfortunately the tape recorder that was being used to record the songs had remained on pause for the whole session, so the initial material was lost forever.

The band was resurrected when Scott Carlson re-joined Cathedral in 2011. During the recording sessions of their swansong album, The Last Spire, there was a spare afternoon in the studio, so the guys (with drummer Gomez) decided to make a bunch more songs up on the spot and record them. The result is this EP, released by MCR records in Japan, a legendary hardcore/punk label that released the Napalm Death/SOB split flexi disc back in 1988. More from Septic Tank soon! 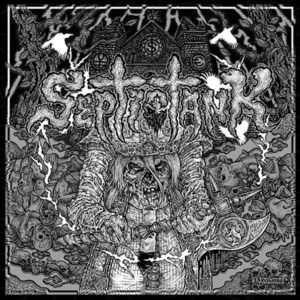 You're viewing: Septic Tank The Slaughter 7″ Vinyl £6.99
Add to basket