Scandal Kiss From The Darkness CD

CORVID 19 Delivery Times Update
Delivery of this item is unaffected and will take our usual 5 - 7 working days for UK orders. Your order will be packed by our workers safely from isolation at home with orders collected in bulk directly by Royal Mail on Tuesday & Friday.
More Info / Statement on Corvid 19
SKU: JPU060 Categories: Scandal, Band Merch, CDs

Scandal Kiss From The Darkness CD

Kiss from the darkness is the brilliant new album from Japans guitar-pop pioneers SCANDAL. After ten years reigning the charts of Japan under Sony Music, the band decided to leave and form their own label. Kiss from the darkness is the first album released under the newly formed label, and has been licensed to JPU Records for release overseas. The album includes their first single from the label Masterpiece, a powerful, upbeat blast of Japanese pop-rock that has achieved over 1.5 million views on YouTube so far. Latest single A.M.D.K.J. is also the theme song to the latest series of iconic anime GeGeGe no Kitaro. 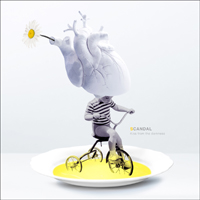 You're viewing: Scandal Kiss From The Darkness CD £12.99
Add to basket