CORVID 19 Delivery Times Update
Delivery of this item is unaffected and will take our usual 5 - 7 working days for UK orders. Your order will be packed by our workers safely from isolation at home with orders collected in bulk directly by Royal Mail on Tuesday & Friday.
More Info / Statement on Corvid 19
SKU: SOSLP102 Categories: Ruts DC, Band Merch, CDs

The Ruts were a reggae-influenced British punk rock band, notable for the 1979 Top 10 hit Babylons Burning, and an earlier single In a Rut, which was not a hit but was much played and highly regarded by the UK BBC Radio 1 disc jockey, John Peel. After meeting at the Deeply Vale Free Festival, The Ruts were formed on 18 August 1977, the band consisted of Malcolm Owen (vocals), Paul Fox (guitar), John Segs (sometimes Seggs) Jennings (bass) and Dave Ruffy (drums). As part of the Misty in Roots People Unite collective based in Southall, west London, the band were active in anti-racist causes and played a number of benefits for Rock Against Racism. 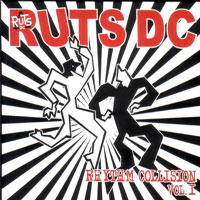