CORVID 19 Delivery Times Update
Delivery of this item is unaffected and will take our usual 5 - 7 working days for UK orders. Your order will be packed by our workers safely from isolation at home with orders collected in bulk directly by Royal Mail on Tuesday & Friday.
More Info / Statement on Corvid 19
SKU: WRR219 Categories: Reno Divorce, Band Merch, CDs

2011, 2012 and 2013 RENO DIVORCE were called best Punk band in Denver by Westword Magazine. RENO DIVORCE will come back to Europe after four long years in August 2016. The Three cool guys from mile high city playing their own cool Southern California Punkrock. In the spirit of Bands like Social Distortion, Adolescents or Bad Religion, RENO DIVORCE add a shot of Rockabilly and a bit of Honky Tonk Country to their genious Punk-Riffs. They have already played several European Tours; from small Clubs to big Festivals (With Full Force, Speedfest …). This summer Wolverine Records will release the brand new 6 Song CD-EP “Ship of Fools”. 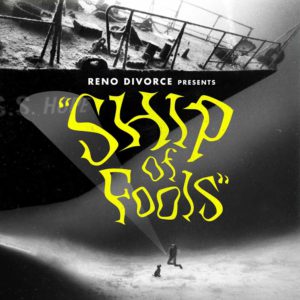