CORVID 19 Delivery Times Update
Delivery of this item is unaffected and will take around 5 - 10 working days for UK orders (although there may be delays with Royal Mail). Your order will be packed by our workers safely from isolation at home with orders collected in bulk directly by Royal Mail on Tuesday & Friday.
More Info / Statement on Corvid 19
SKU: CRUZ30CD Categories: Reflection, Band Merch, CDs

Reflection, the driving force of Hellenic Epic/Doom Metal, move towards the 17th year of their existence. From the early endeavours of “Before The End” (1992) and the very successful “When Immortals. Die!” (1993) demo tapes, to the three times sold out “Sire Of The Storm” 7 EP Single (1995 Dark Side Records) and “The Fire Still Burns” CD (1999 self financed), the band managed to pass the first difficult years. The new millennium the release witness the releases of “Realms Of The Night” Split CD (2001 NMC music), “The Fire Still Burns-2001 Edition” CD (2001 Secret Port records) and the concept album “Odyssey” (2003 Secret Port records), with which Reflection passed the test of time and proved that there is still a chance for Epic/Doom Metal. In 2008 REFLECTION join forces with CRUZ DEL SUR MUSIC for the release of their new album entitled When Shadows Fall. With songs such as Mistress of Sea, Desert Land and Kingdom of Fire, Reflection have composed another masterpiece in epic doom metal, one eye focused on creating sad melodies and oppressive atmospheres, and the other fixed onto the heaviness required by this particular style, adding the bonus of Leo Stivalas strong vocals, definitely one of the best-fitting singers of the genre. Being mainly a live band, Reflection has performed in many live shows as a headline and participated in a big number of festivals, joining forces on stage with world famous acts like Solitude Aeternus, Demon, Paul Di Anno, Wotan and many more. Already confirmed is their show with the legendary NWOBHM act Tokyo Blade in Athens on the 16th of November 2008 and their participation on the 7th of March 2009 to the Up the Hammers festival in Athens. 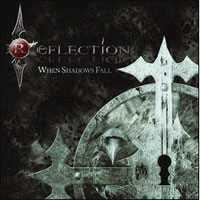 You're viewing: Reflection When Shadows Fall CD £14.99
Add to basket