CORVID 19 Delivery Times Update
Delivery of this item is unaffected and will take our usual 5 - 7 working days for UK orders. Your order will be packed by our workers safely from isolation at home with orders collected in bulk directly by Royal Mail on Tuesday & Friday.
More Info / Statement on Corvid 19
SKU: MASCD1079 Categories: Psychopunch, Band Merch, CDs

4 years have passed since Psychopunch released their latest studio album. About time to release a new one! On “Greetings From Suckerville”, the band decided to go back in time, and go for a little bit more raw rock ‘n’ roll/punk rock ‘n’ roll kick-ass sound and the way they sounded “back in the days”! Shorter songs, more attitude, but still catchy sing-along tunes with a lot of love and party feeling. The guys weren’t too damn serious or accurate in the studio – and neither should you. Let the music do the talking! Let it flow and be more rock ‘n’ roll! 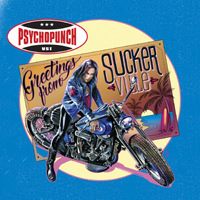 You're viewing: Psychopunch Greetings From Suckerville CD £15.99
Add to basket