Since bursting out of the Seattle scene in 1991 with their multi-platinum selling debut Ten, Pearl Jam have not just remained one of that citys truly great acts, they have also become – over the intervening 2 decades – one of the very finest rock bands in the world today. Famously labeled grunge sell outs by Kurt Cobain, Pearl Jam went onto become, by 1992, the biggest selling music artists in the USA. This success did not, however, sit easily with the group. After sophomore album Vs went on to become the fastest moving American record off all time, Eddie Vedder and Co. set about reconstructing their sound while launching a campaign against what they perceived to be the more unjust aspects of the music industry. And even now, after 20 years in the game, Pearl Jam refuse to rest on their laurels, constantly exploring new musical directions while remaining as fiercely loyal to their fans as ever.

Pearl Jam  Under Review documents this extraordinary bands rise to glory and explores quite how they have confounded fans and critics alike, maintaining their status among rocks elite while refusing to compromise their artistic and ethical values. Includes archive interviews with the band themselves from across their career, contributions from their closes allies and from the finest rock writers and commentators, rare and classic performance footage, previously unseen photographs, tour antics, location shoots and many other features, which all at once make for the finest documentary in existence on the most iconic rock act of the past quarter century. 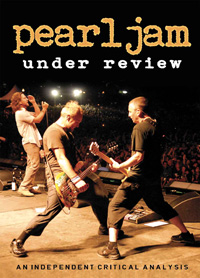 You're viewing: Pearl Jam Under Review DVD £5.99
Add to basket