CORVID 19 Delivery Times Update
Delivery of this item is unaffected and will take around 5 - 10 working days for UK orders (although there may be delays with Royal Mail). Your order will be packed by our workers safely from isolation at home with orders collected in bulk directly by Royal Mail on Tuesday & Friday.
More Info / Statement on Corvid 19
SKU: DS711LP Categories: Peace Of Mind, Band Merch, Vinyl LP

Peace Of Mind… thats David, Patrick, Bulma and Louis from the depths of the Thuringian Forest. It all happened 2015, as they decided to combine their different tastes in music to form something unique, so they found themselves in a genre called  Hardcore. In 2015 they began to experiment with different ways to express their music and recorded their first  s/t EP. With the same setup and some gained experience, they recorded a 2nd EP called  Gaze Into An Abyss in 2016 and released it via PowerTrip Records, just like the first one. Their first full lenth called  Penance will finally see the light of the day in 2018 which will be released via Dead Serious Recordings / Powertrip Records. 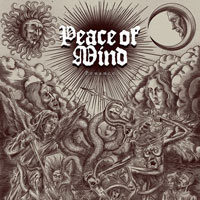