Oslo Ess release their third studio album Alle Hjerter Deler Seg (Eng.: All hearts splits/devides) this February. Since their first live performance on national TV in Norway in 2011, they have impressed the Norwegain audience and accomplished a lot as a band. During these three years, Oslo Ess has released 5 radio-hits, Set a national record in most shows played in a year (200), been nominated for a Norwegian Grammy and hit #1 on the national sales charts. Oslo Ess finally enjoys the success from all their hard work, having well earned a spot high up on the list over the most successful rock bands from Norway.
«Alle Hjerter Deler Seg» is a record that take Oslo Ess back to their roots; true Punk. The album does not only contain new tracks, written and composed on different hotel rooms, studios and tour-busses the past year, but also tracks from the first days as a band. A time when the creativity was in great bloom in between the concrete walls of various rehearsal rooms and bomb shelters located on the worst parts of their beloved hometown Oslo.
The album was recorded in idyllic surroundings at Ocean Sound Recordings in Giske, Norway with Nick Terry, and in Parachute Studios in Oslo with help from Roar Nilsen (The Cumshots) and Bjarte Lund Rolland (Kvelertak). The third record from Oslo Ess is fierce and tough at times, tight from the beginning til the end  in accordance with the core of their music  and with the characteristic Oslo Ess-elements like catchy choruses, melodic guitar-riffs and mischievous lyrics that together define Alle Hjerter Deler Seg.
Oslo Ess will donate free copies of the new album to the street magazine = Oslo! This magazine is sold on the streets in Oslo by homeless (just like Big Issue in UK). With this donation, Oslo Ess wants to give something back to the city that has been of such big impact for the band and their music, by giving some extra attention to the those how have made the streets their home. 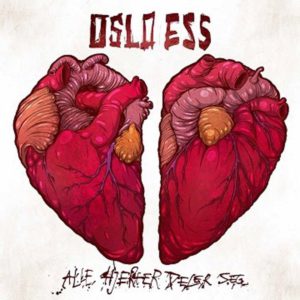