View basket “NOFX The Longest Ep CD” has been added to your basket.

Its NOFX!! You know, one of the most imitated punk bands of the last 25 years, beloved by droves of loyal fans, the standard bearer in the independent music scene, among the most influential and often controversial bands of their time, the most widely traveled group around, the authors of countless hit songs Yeah, them. Theyve got a prodigious resume to be sure and an extensive catalog to back it up: 11 full-length studio albums, 2 live records, 13 EPs, and so many 7s itll give you a headache trying to remember them all. With so many odds and ends out there, Fat Mike (singer/bassist) decided it might be nice to cull the majority of their EPs into one release, The Longest EP. A collection of 30 songs, The Longest EP spans NOFXs first Fat Wreck Chords release The PMRC Can Suck On This to their latest Cokie the Clown. It includes 8 tracks that have never been available on cd or digitally, and 2 songs previously unreleased in any format. The albums title continues the bands trademark witticisms with a play on the title of NOFXs most popular EP, The Longest Line, which itself is included amongst the impressive track listing. In addition, NOFX commissioned the original artist that illustrated the now famous cover for The Longest Line to create the artwork for The Longest EP. With an ardent and extensive fan base, NOFXs releases are always met with great anticipation and The Longest EP will be no different. Just to up the ante, the vinyl version (double LP) will be a pressing limited to 2000, which will drive its collectability through the roof. 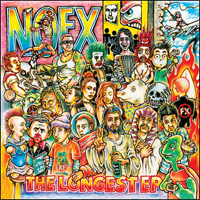