View basket “NOFX Backstage Passport 2 (2xdvd) DVD” has been added to your basket.

With the recording of NOFXs acclaimed 2012 release Self-Entitled, the band upheld their tradition of uber proficient song writing and emerged from the studio with more songs than they had room for on the album.

Atlast, as a follow up to Self-Entitled, the band compiled the Stoke Extinguisher EP to give the songs the attention they deserve.

The title track accomplishes exactly the opposite of what the name implies.
Sneaking in with some low-fi reverb filled vocals, it quickly changes course unleashing an unbelievably fat guitar riff accompanied by the bands trademark blend of melody and pummeling rhythm.

Filled out by a rousing rendition of Tony Slys The Shortest Pier, the tongue-in-cheek My Stepdads a Cop and My Stepmoms a Domme, and an even edgier demo version of the hardcore masterpiece I Believe In Goddess, Stoke Extinguisher is a compact punch of quintessential NOFX. 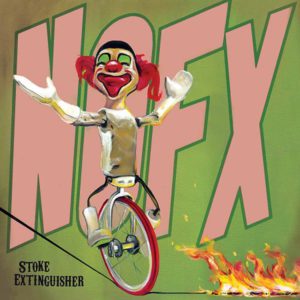