CORVID 19 Delivery Times Update
Delivery of this item is unaffected and will take around 5 - 10 working days for UK orders (although there may be delays with Royal Mail). Your order will be packed by our workers safely from isolation at home with orders collected in bulk directly by Royal Mail on Tuesday & Friday.
More Info / Statement on Corvid 19
SKU: FAT503 Categories: NOFX, Band Merch, Vinyl LP

Classic mini album from the biggest ‘proper’ Punk band in the world. Contains the title track and the humorous anti racism track “Kill All The White Men” which still feature as prominently in the bands live set today as they did when they were playing to audiences of fifty people as the band were when this was released. 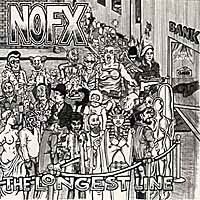