Whats really left to say about NOFX? For over thirty years the reigning kings of punk rock have remained relevant by continuing to push the boundaries of their music and lyrics in a way thats as endearing as it is infectious.
For that reason its remarkably apt that the bands latest LP First Ditch Effort is also their thirteenth, because ominous black clouds hang over this collection of songs that see frontman/bassist Fat Mike exploring self-loathing and mortality in a more raw and honest way than he ever has before.

Mike credits much of this to the writing process behind NOFX: The Hepatitis Bathtub and Other Stories, the bands New York Times Bestselling memoir that forced him to confront his ghosts and revisit his past in ways that werent always comfortable.
Additionally, having focused so much energy on writing songs for a Broadway musical over the past few years, Fat Mikes songwriting on First Ditch Effort benefits from a similarly nuanced and varied approach, while simultaneously spitting out all the pent up angst and aggression that was necessarily reserved for NOFX songs.

Guided by the collaborative influence of producer Cameron Webb (Motorhead, Alkaline Trio, Social Distortion, Pennywise), the album busts out of the gate with the amped up Six Years on Dope and never looks back.
From the ultra-melodic word-play of Oxy Moronic to the charging desperation of I Dont Like Me Anymore, First Ditch Effort flexes the broad spectrum of NOFXs abilities and delivers on the musicianship, wit, and element of surprise that fans have come to expect. 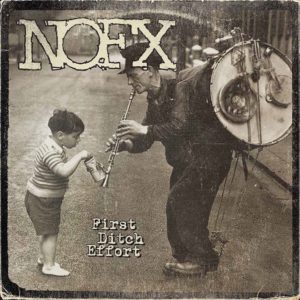