No Use for a Name Rarities Vol. 1: The Covers CD

No Use for a Name Rarities Vol. 1: The Covers CD

When it comes to CLASSIC Fat Wreck bands NO USE FOR A NAME certainly need no introduction, but heres the scoop: NO USE FOR A NAME were one of the rst bands on Fat Wreck Chords and remain a cornerstone of the label roster. Their unique take on California punk emphasized equally innovative and catchy melody, paired with top-ight musicianship. Despite the tragic passing of singer and songwriter Tony Sly in 2012, their presence can still be felt today, as their inuence is evident in the work of many other artists. Over the course of their more than 20 year career, NO USE FOR A NAME amassed an impressive catalog of albums packed with hit songs. From their debut Fat release The Daily Grind almost 25 years ago, to their nal studio album The Feel Good Record of the Year in 2008, NUFAN has and always will be a Fat Wreck staple. Along with their massive catalog of classic originals, NUFAN has always been keen to a good cover song. You can nd a handful of them on various comps, and 2001s Live In A Dive. But there is more… so much more. We have combed through NUFANs entire recording archive to bring you a collection of every non-album cover song ever recorded. Rarities Vol. 1: The Covers has a bunch of tracks the die-hard NUFAN fans will be familiar with, but many more rare tracks which have been buried for decades. From KISS, to THE MISFITS, to DEPECHE MODE, to CHEAP TRICK; NUFAN can put their stamp on just about any genre. They even covered The Munsters and Leverne & Shirley theme songs. No Shit. Move aside Gimmes, There is a new cover band in town. As the title suggests, stay tuned for the release of Vol. 2 in the near future. 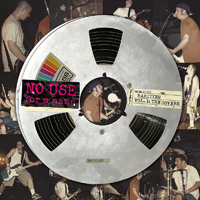