CORVID 19 Delivery Times Update
Delivery of this item is unaffected and will take our usual 5 - 7 working days for UK orders. Your order will be packed by our workers safely from isolation at home with orders collected in bulk directly by Royal Mail on Tuesday & Friday.
More Info / Statement on Corvid 19
SKU: BOBV160LP Categories: Band Merch, Motorhead, Vinyl LP

What’s Wordsworth? is a Motörhead live album recorded in 1978 but not released until 1983. Wilko Johnson organised a charity event on 18 February 1978 at The Roundhouse to raise money to help preserve some William Wordsworth manuscripts. The Count Bishops and Motörhead were also on the bill, but for contractual reasons Motörhead needed to perform under another name. Lemmy came up with the name Iron Fist and the Hordes from Hell, which would later be used for the name of a studio album. During this performance Mick Farren joined them onstage for a version of “Lost Johnny”.
DELUXE VINYL EDITION!!! 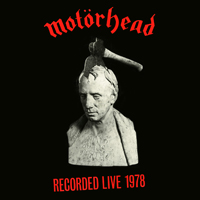