CORVID 19 Delivery Times Update
Delivery of this item is unaffected and will take around 5 - 10 working days for UK orders (although there may be delays with Royal Mail). Your order will be packed by our workers safely from isolation at home with orders collected in bulk directly by Royal Mail on Tuesday & Friday.
More Info / Statement on Corvid 19
SKU: CTCD7063 Categories: Band Merch, CDs, Misfits

Horror Rock icons The Misfits have for over 30 years been bang smack on the cutting edge of the punk rock scene. From the early DIY singles, to the hardcore sound of the 80s, and their metal influenced output in the 90s, the bands music has constantly evolved winning them new plaudits with every release. With an album of new material on the way, their first in over a decade, The Misfits are once again ready to take centre stage. 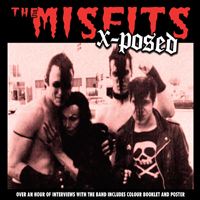