CORVID 19 Delivery Times Update
Delivery of this item is unaffected and will take our usual 5 - 7 working days for UK orders. Your order will be packed by our workers safely from isolation at home with orders collected in bulk directly by Royal Mail on Tuesday & Friday.
More Info / Statement on Corvid 19
SKU: 309782 Categories: Madina Lake, Band Merch, CDs

Madina Lake set the stage for an immersive three-album trilogy with their debut, From Them, Through Us, to You in 2007. Set in the fictional 1950’s town of Madina Lake, the story began with the disappearance of a gorgeous local celebrity named Adalia. The denizens of the town frantically searched for her as the band introduced more characters in Attics To Eden. The plan for World War III was to outline the battle between good and evil in the final chapter of this fantasy, however, real evil intervened. In June 2010, Matthew was brutally injured after stopping a man from beating his wife. He ended up in a coma for five days with a fractured skull, broken jaw, and a swollen brain. After four months of recovery, Matthew was back in the band’s studio, The Attic, working on new material with his brother and bandmates. World War III sees the group following every creative impulse to the fullest. On the album’s first single “Hey Superstar,” elegantly ethereal textures bleed into propulsive guitars just before an anthemic hook takes hold. The song rises and falls like a roller coaster of riffs and melodies. Other songs bring listeners closer to the band than ever before. “We Got This” is an uplifting tribute to Matthew from Nathan, showing the strength of their bond. Meanwhile, “Howdy Neighbor!” viscerally calls out Matthew’s attacker with a vicious verse and a battering chorus. “Imagineer” proved to be a truly “perfect” dream come true for the twins. Matthew and Nathan planned on taking a weeklong retreat to Sedona to hang with legendary Smashing Pumpkins mainman Billy Corgan. Focusing on Matthew’s healing, they didn’t think they’d end up working on music with Corgan, but “Imagineer” was born from one of Corgan’s riffs during that trip. Given the events of the past two years, Madina Lake are ready for anything. Matthew concludes, “You have to have hope. You have to live in the moment. You can’t regret the past. You can’t be anxious about the future. The weight of everything is magnified, and every second of being able to do this feels like a blessing. This is more powerful and enjoyable than ever.” For Nathan, there’s one crucial thing he wants listeners to walk away with. “You can survive anything,” he declares. “What goes down shall rise again. Life will throw things at you that you can’t even fathom surviving, but you can. If someone feels that after listening to World War III, we’ve done our job. To have the opportunity to make music, we’re the luckiest people in the world. Thanks to everyone for saving the life of my brother and the band.” 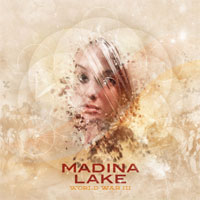