CORVID 19 Delivery Times Update
Delivery of this item is unaffected and will take our usual 5 - 7 working days for UK orders. Your order will be packed by our workers safely from isolation at home with orders collected in bulk directly by Royal Mail on Tuesday & Friday.
More Info / Statement on Corvid 19
SKU: PSRLP098 Categories: Leather, Band Merch, Vinyl LP

After 30 years, the masterpiece is finally available again on vinyl!!

In 1989, one of the first ladies of heavy metal was in the limelight. Leather Leone released their first solo album as LEATHER. Her singing career began in the early 1980s. With Sandy Sledge she founded the all-female band RUDE GIRL, which broke up despite having a lucrative record deal. However, Shrapnel Records owner Mike Varney absolutely wanted to find a band for Leather and brought her together with shredding maestro David T. Chastain. As CHASTAIN they released five albums in six years, but in 1989 LEATHER wanted to record a solo album and she did. A superb male trio assisted her: bassist David Harbor (including CHASTAIN, KING DIAMOND, MANTA RAY), guitarist Michael Harris (DARKOLOGY, THOUGHT CHAMBER, ARCH RIVAL, ZANISTER) and drummer John Luke Hebert (MANTA RAY, CHASTAIN, KING DIAMOND). The result: “Shock Waves”, which is one of the most undervalued pieces of Power Metal – with heavy and wonderful tracks like “Something in this Life” and “It’s Still In Your Eyes”. 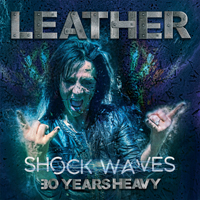