CORVID 19 Delivery Times Update
Delivery of this item is unaffected and will take our usual 5 - 7 working days for UK orders. Your order will be packed by our workers safely from isolation at home with orders collected in bulk directly by Royal Mail on Tuesday & Friday.
More Info / Statement on Corvid 19
SKU: HRR613LP Categories: Leather, Band Merch, Vinyl LP

Without the shadow of a doubt Leather Leone is one of the most legendary female heavy metal vocalists of all time. She began her singing career by joining up with guitar wunderkind David T. Chastain. Chastain’s 1985 album »Mystery Of Illusion« is an all-time metal classic. Not least thanks to Leather’s outstanding vocal performance on the record. In 1989, Leather released her first solo effort called »Shock Waves« through David Chastain’s own Leviathan Records label. A mere 29 years later she is now presenting her follow up album simply enough called »Leather II«. A song like “The Outsider” on the new album sounds quite a lot like a version of Judas Priest circa “Screaming For Vengeance” with female vocals. »Leather II« for sure is a true blue heavy metal album from start to finish … We are all inspired by the older incomparable metal sound, remarks Leather Leone. The boys from Brazil, as I call the band, are extremely into the metal of the 80s. They are actually into an assortment of different music from the 70s, 80s and 90s which was another strange path for me. Im glad you noticed. Thank you, that is a huge compliment. For you, Mr Halford … 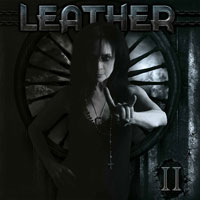