View basket “Late Bloomer Wating CD” has been added to your basket.

CORVID 19 Delivery Times Update
Delivery of this item is unaffected and will take around 5 - 10 working days for UK orders (although there may be delays with Royal Mail). Your order will be packed by our workers safely from isolation at home with orders collected in bulk directly by Royal Mail on Tuesday & Friday.
More Info / Statement on Corvid 19
SKU: SIXONE105CD Categories: Late Bloomer, Band Merch, CDs

On LATE BLOOMERs third full length,Waiting the band have truly come into their own with an achingly human record that explores the crushing uncertainty of adulthood through a mix of hook-driven guitar rock and punk urgency. The album centers on ever-changing perspectives, with all three members (drummer Scott Wishart, bassist Josh Robbins, and guitarist Neil Mauney who fittingly all met in Wisharts own shop, Lunchbox Records) contributing to the writing process to utilize their personal narratives, as well as pointsof-view completely outside their own. 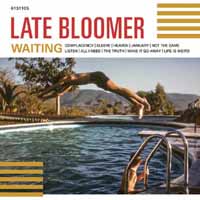