CORVID 19 Delivery Times Update
Delivery of this item is unaffected and will take our usual 5 - 7 working days for UK orders. Your order will be packed by our workers safely from isolation at home with orders collected in bulk directly by Royal Mail on Tuesday & Friday.
More Info / Statement on Corvid 19
SKU: TOI15 Categories: Grossty, Band Merch, CDs

Indian grindcore legends Grossty have been shocking the nation ever since their inception. From their vulgar pelvic thrusts on stage to their audacious themes encapsulated in the wonderful T Bare McClough artwork (ex-Transcending Obscurity staff member from UK), Grossty’s ‘Crocopter’ debut is probably the most awaited album in the underground. Expect nothing less than over-the-top neck-snapping madness. With song titles like ‘Mermaid Marriage’, ‘Proud to be a Pervert’, ‘Pussy Bun’ and ‘Tortoise on a Tree’, you get the gist. Each song has special demented lyrics with some artwork reference or the other included in the artwork. There are two such artworks – one for the album cover, one for the slipcase. Each physical product comes with a poster of the ‘Hexesquigglid’ (slipcase artwork). This is madness and wild fantasies channelized through punk/crust-laced grindcore. Two vocalists make sure the 20-minute long ‘Crocopter’ experience is colourful as the drummer breaks records (and heads) with his insane speed and versatility. Mastered in the US, nothing has been compromised on. If you thought originality was lacking in grindcore, here’s a fresh take on the whole style – without diminishing the fun element. Like it or be repulsed, ‘Crocopter’ will go down as one of the most outstanding albums of this genre. 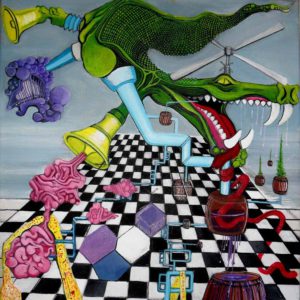