The worlds most successful punk band, Green Days transformation from San Francisco cult heroes to global rock phenomena is as staggering as it is captivating. From a scene credited with introducing the American public at large to Punk Rock in the early 1990s, the group were quick to establish themselves as the most vital of their peers, with their major label debut Dookie going on to sell 20 million copies worldwide. Over the following decade a series of further massive selling albums, numerous sold out world tours and a staggering array of awards, kept Green Day in the limelight. But with the release of 2004s extraordinary American Idiot the band crossed into another dimension and opened themselves up to a whole new audience.

Green Day  The DVD Collectors Box is a 2 disc set which celebrates the astonishing career of this glorious band. Including one disc which charts the bands rise to the top, featuring exclusive interviews with ex-band members, friends, and those who know them best, plus archive footage and a host of other features, this film reveals an inspirational and insightful story. The second disc consists of an in-depth analysis of Green Days recorded output. Featuring live and studio performances, rare footage, contributions from colleagues and peers and expert opinion from some of rocks most esteemed journalists. 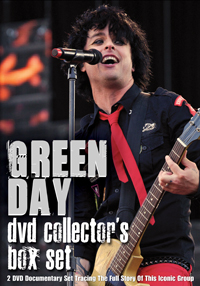