CORVID 19 Delivery Times Update
Delivery of this item is unaffected and will take around 5 - 10 working days for UK orders (although there may be delays with Royal Mail). Your order will be packed by our workers safely from isolation at home with orders collected in bulk directly by Royal Mail on Tuesday & Friday.
More Info / Statement on Corvid 19
SKU: PVMT6039 Categories: Future Leaders of the World, Band Merch, CDs

New Orleans based post-grunge alternative mainstays Future Leaders of the World (F.L.O.W.) are back with their new album “Reveal”. This marks the follow up to their highly successful debut album “LVL IV”. Released on Epic Records this debut masterpiece features the hit song “Let Me Out” which received extensive airplay and earned the band a GOLD award for the single. The album itself also went on to sell 150,000 units. “Reveal” marks the next chapter of F.L.O.W. and continues right where they left off. Catchy choruses, great hooks, and a massive production will make this a must have for any rock/alternative fan. A nationwide tour with rock veterans Saliva will follow street date along with a rigorous touring schedule to follow. 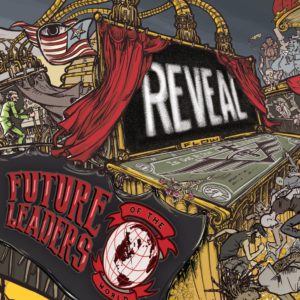 You're viewing: Future Leaders of the World Reveal CD £6.99
Add to basket