“Under A Common Sky” is the third album from London based four-piece Electric Litany. The 9 tracks were written in a beach house in Corfu during the Summer of 2017, before being recorded at Fish Factory, North London by producer George Botis. It is Electric Litany’s most ambitious recording to date. Inspired not only by the nocturnal nature of the island, but also the humanitarian crisis in which we find ourselves. The album invites us into dark territory with early tracks “CFU” and “Sealight” before ascending to the heavenly heights of mid-album track “Bedroom” – a song reminiscent of classic 1970s songwriting. Tales of humanity that permeated earlier albums once again reveal themselves in the unambiguously titled Refugee. The almost dystopian cinematic production acting as a fitting backdrop to the record. Under A Common Sky has already gained international attention with the release of the video teaser for the haunting album opener “Azure” on One RPMs YouTube channel, and big things are bound to happen. 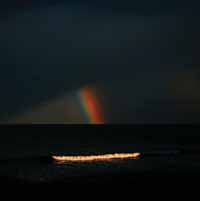