CORVID 19 Delivery Times Update
Delivery of this item is unaffected and will take around 5 - 10 working days for UK orders (although there may be delays with Royal Mail). Your order will be packed by our workers safely from isolation at home with orders collected in bulk directly by Royal Mail on Tuesday & Friday.
More Info / Statement on Corvid 19
SKU: GAP099LP Categories: Docenterna, Band Merch, Vinyl LP

Docenterna returns with chorus based existentialism in the form of new album “Kritstreckständer and missiler.” This is a classic Docenterna album, strong chorus, thoughtful everyday experiences and chewing gum hooks that get stuck. At the surface, it seems like the band follows all the structures of pop music, but the music has a built-in warp that causes them to stand outside the clarified. It is this combination that made Docenterna something unique that got stuck in the Swedish people’s souls. The new album contains ten tracks, both for the continued longevity of the band while renewing them with new hits like “Spelar Roll”, “Sockerbomb” and “Allt blir bra.”

“We previously stroll – often subordinate – around the community and wrote about what struck us in. Focused on good pop with thoughtful texts. During this recording, the world was increasingly cleared by cripples and missiles. It put its tracks in lyrics and music and could not get around or flip by. That is why the album is just named: Kritstrecksränder och missiler (pinstripe stripes and missiles), says Joppe Pihlgren.

Docenterna started as Docent Död and have previously delivered Swedish unforgettable hits like “Solglasögon”, “Bensin i blodet” and “Utan dig”. The album is the first new music from Docenterna since 2014 and the first new album since 2011 “Medan vi spelar pop”. The recording has taken place in Studio Rymden by Daniel Bengtson. Docenterna consists of Kricke Pihlgren / drums, Jon Jefferson Klingberg / guitar and song, Larry Lövgren / bass and song and Joppe Pihlgren / song and guitar.

“Best of all? They never try to sound like anything else than Docenterna.” – Sonic

“The compelling formulations are there, like the guitar riffs and the energy, but there is also a quiet depth that balances it all, as in the ballad Hej då natt. Nice Swedish pop, plain and simple.- NWT 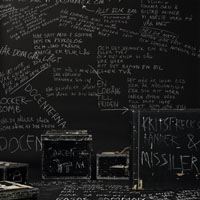