CORVID 19 Delivery Times Update
Delivery of this item is unaffected and will take around 5 - 10 working days for UK orders (although there may be delays with Royal Mail). Your order will be packed by our workers safely from isolation at home with orders collected in bulk directly by Royal Mail on Tuesday & Friday.
More Info / Statement on Corvid 19
SKU: INV113 Categories: Discipline X, Band Merch, CDs

The Netradio stations all over the world have played their songs from the very beginning. The feedback from media have also been very positive and Rock Hard Magazine from Germany

stated that: “Discipline X is still the most unique band from Finland”

The Debut album “Wasted In Hollywood” is released 21.03.2014 by Inverse Records.
The Album contains catchy and hard riffs, speed, attitude and obscenity. The lyrics deals with real life themes like drinking, relationships and sloppy women.
There’s no stories about dragons, swordsmen or happy endings in this records!

The Trademark for Discipline X is their unique and personal style. They do not bow to anyone and will always keep their own style in both good and bad.

If you’re into hard, fast and punky metal, then do not hesitate to join in the army of Discipline X! 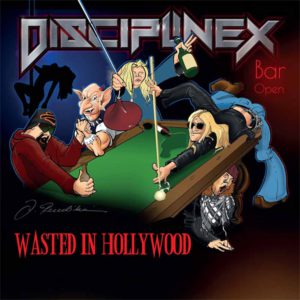