View basket “Dead Kennedys Plastic Surgery / In God We… CD” has been added to your basket.

CORVID 19 Delivery Times Update
Delivery of this item is unaffected and will take around 5 - 10 working days for UK orders (although there may be delays with Royal Mail). Your order will be packed by our workers safely from isolation at home with orders collected in bulk directly by Royal Mail on Tuesday & Friday.
More Info / Statement on Corvid 19
SKU: DKS69CD Categories: Band Merch, CDs, Dead Kennedys

The second Dead Kennedys album and the release that established the band as one of the Worlds most controversial underground acts.
Released in 1982, Plastic Surgery Disasters cuts into the underbelly of American society exposing the hidden truths of corporate greed, state control and the lie of the American dream.
Seen by many as the bands greatest work , P.S.D. features the all time DK greats like Bleed For Me, Riot, I Am The Owl, Moon Over Marin and Halloween!

Coupled to this is the highly controversial 1981 release  In God We Trust, Inc, an all time classic release featuring tracks like Moral Majority, Rawhide, Weve Got A Bigger Problem Now and Nazi Punks Fuck Off! 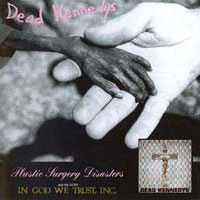 You're viewing: Dead Kennedys Plastic Surgery / In God We… CD £12.99
Add to basket