CORVID 19 Delivery Times Update
Delivery of this item is unaffected and will take our usual 5 - 7 working days for UK orders. Your order will be packed by our workers safely from isolation at home with orders collected in bulk directly by Royal Mail on Tuesday & Friday.
More Info / Statement on Corvid 19
SKU: DKS12CD Categories: Band Merch, CDs, Dead Kennedys

The final studio album from the Dead Kennedys originally released in 1986.

This 21 track album saw the band take a more thrashy edge to their sound resulting in some of their most fast and intense tracks. With arguably one of the best album covers of all time Bedtime For Democracy continues to be one of the most popular punk albums of the 1980s. Features the tracks Hop With The Jet Set, Rambozo The Clown Great Wall and Chickenshit Conformist. 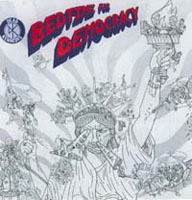