Crime In Stereo I Was Trying To Describe You.. CD

Crime In Stereo I Was Trying To Describe You.. CD

Named one of Alternative Press Magazines Most Anticipated Releases of 2010, I Was Trying To Describe You To Someone is the career-defining album from Long Islands Crime in Stereo. I Was Trying To Describe You To Someone is another collaboration between the band and producer extraordinaire Mike Sapone (Brand New, Taking Back Sunday), and the follow-up to the critically acclaimed album Is Dead. Hailed by fans as well as critics as “The Shape of Hardcore to Comesome of the most ambitious, stunning songwriting melodic hardcore has witnessed in years” by Alternative Press and as “a great album, full stop by Big Cheese, the pressure to surpass the standard set by Is Dead was great. Crime In Stereos hard work alongside Sapone has done more than surpass their previous efforts; I Was Trying To Describe You To Someone clearly transcends anything the band has released to date and is an ambitious, thought-provoking release and one of the finest rock albums of the year. 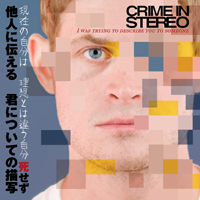 You're viewing: Crime In Stereo I Was Trying To Describe You.. CD £4.99
Add to basket