CORVID 19 Delivery Times Update
Delivery of this item is unaffected and will take our usual 5 - 7 working days for UK orders. Your order will be packed by our workers safely from isolation at home with orders collected in bulk directly by Royal Mail on Tuesday & Friday.
More Info / Statement on Corvid 19
SKU: FAT764LP Categories: Cobra Skulls, Band Merch, Vinyl 12"

Defining COBRA SKULLS is dichotomously quite simple and extremely difficult. The simple approach would be to dub them one of the most genuine and meaningful punk bands of the past ten years. The complex route would be to take into account the fact that they have drawn comparisons to the likes of Against Me!, The Clash, the Misfits, Chuck Berry, and One Man Army, and iterate the notion that COBRA SKULLS somehow simultaneously encapsulate the diverse sound of each of those artists equally. It’s an equation that goes against the very laws of nature, but once you’ve heard them somehow it all makes sense. Like some lab experiment gone horribly right. Beyond their unique amalgam of musical styling, there is also the highly charged message behind COBRA SKULLS music, both of which are on full display on their Fat Wreck debut Bringing the War Home. 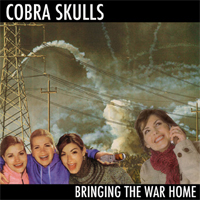