The first full-length Blink 182 release (and the only independently distributed one), Buddha was recorded in the early 90s but released for the first time on CD and vinyl in 1998. The band are back in the headlines with their new album, which is selling really well! Kung Fu is finally satisfying the demand for this rarest of rare Blink 182 collectables. Digitally remixed and re-mastered by Mark Hoppus himself, the CD has sold over 400,000 units on Kung Fu. 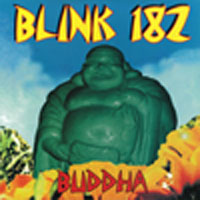