Antichrist’s two demo tapes “Crushing Meetal Tape” (2009) and “Put To Death” (2010) released on CD for the first time! Since then the band has also two studio albums under their belt; Forbidden World (2011)  re-released on vinyl by I HATE in 2019  and Sinful Birth CD/LP on I HATE in 2017. For some name-dropping, think POSSESSED, INFERNÄL MÄJESTY, DESTRUCTION and caveman old era EXODUS. The sound has not been tampered with in order to preserve the raw evil energy! Posers beware! 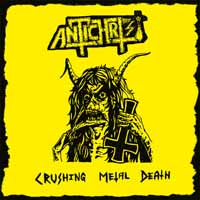