CORVID 19 Delivery Times Update
Delivery of this item is unaffected and will take around 5 - 10 working days for UK orders (although there may be delays with Royal Mail). Your order will be packed by our workers safely from isolation at home with orders collected in bulk directly by Royal Mail on Tuesday & Friday.
More Info / Statement on Corvid 19
SKU: FAT921CD Categories: anti flag, Band Merch, CDs

After more than 20 years writing smash hits about smashing the state, ANTI-FLAG have complied a comprehensive best of album.
Aptly titled A Document of Dissent, this collection houses two decades of material that thoroughly represents ANTI-FLAGs strong blend of music and message.
Originally aimed at toppling oppression, it wasnt long before ANTI-FLAGs songs were topping the charts.

Comprised of 26 tracks, culled from 9 full-length albums spanning 6 labels, A Document of Dissent showcases the evolution of the bands sound with hit after glorious hit, each accompanied by in-depth liners notes from the band illustrating the songs history and significance.

In addition, the packaging includes a biographical timeline of the band cross-referenced with world events.
A Document of Dissent is the quintessential ANTI-FLAG collection for diehard and casual fans alike. 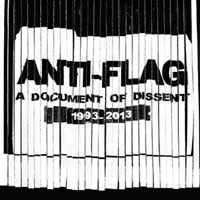