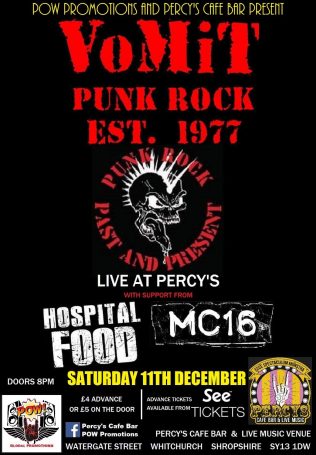 Vomit started in 1977 when Marsh and I (Lee C) had the same interest in punk rock, so we thought we can do that and started to write afew songs. We used to go to Congleton youth centre at Eaton bank school and play loads of punk on their record player, with all the other kids saying "whats this rubbish" but two lads who were interested were Steve and Gez Austin, so we said " lets start a band hey" we started to practise in a room at the youth centre with one amp, bins for drums and the singer just shouting, but we were off, it was Congletons first punk band. Soon we had more amps and Stevo got his first drum kit, so we practised for while doing some very easy punk classic's. Next we thought we would do a gig. The first gig was at The Duke of Wellington in Congleton, ( now a nursing home) but the night before the gig the landlord phoned me up and said "you are not playing at my pub, you have put Vomit all over the toilet walls" (we had put Vomit all over the town and i mean all over the town) so after a few sorry's and Marsh and I painting the toilet walls the gig went ahead. The gig was good with a full pub and we went down really well, so we thought we will have some more of this and went on to play at other pubs in the town The Lion and Bell, The Mechanics Arms and the Youth centre to packed crowds, soon other punk bands were starting to emerge, but there was not alot of places to play then. (alot better today around Congleton) After some great gigs and even better fun some band change's had to happen Stevo moving on and Jamie Adams coming in on the drums, then after a year or so Marshal moved on and Paul Lomas came in on guitar. The bands name changed a few times aswell, from Vomit to Teenage Hell to The End and that was what we were called at our last gig at Astbury Village hall in 1980, so that was just a brief history on the band Vomit but now we are back!. now with two Guitarists Stu & Paul adding even more to the band.
In 2016 we played at two of the top festivals Nice & Sleazy in May and the worlds biggest festival Rebellion in Blackpool.

With Special Guest support from...

Hospital Food welcome all people from all walks of life, all races and backgrounds to our gigs. We do not discriminate against race, religion or colour of skin and "none Punks!"... We don't do Politics, we are about Punk rock not Political debate so please feel free to leave your Political views, no matter what they are, at the door on the way in! We are about playing Punk rock and HAVING FUN!

‘Outvoted By Robots’ - the trio’s debut EP captures all of the above in the four songs contained within.

Musically, MC16 are a short sharp shock of classic punk rock - a whirlwind of snarl and bite, mixed with a ragged melody and street-wise energies.

Times are approximated and may be subject to change

Or £5 on the door on the night of the event.