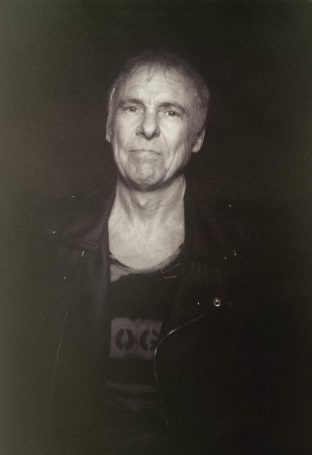 TV Smith was founder member, singer and songwriter for the Adverts, who formed in late 1976, and became one of the leading bands in the first wave of British punk rock. In early 1977, they performed regularly
at the newly-opened Roxy Club in London, and gained cult success with the Stiff Records single "One
Chord Wonders." Their next release, "Gary Gilmore's Eyes" became a hit record, leading to many radio
and TV appearances and extensive media interest. A further single, “No Time To Be 21,” also entered the
charts, and the band spent the rest of the year playing live, including major tours with The Damned and Iggy
Pop. The album that followed in early 1978, "Crossing the Red Sea with the Adverts," is still considered a
genuine classic of the era and is often cited as one of the twenty best punk albums ever released.
The Adverts released one further album, “Cast Of Thousands,” before they split in 1979. Slammed by the
critics at the time, the album was later re-released to universal acclaim, and described by Mojo magazine as
“the long lost punk album that rivals The Clash’s ‘London Calling’.”
Immediately after the break up of The Adverts, TV formed TV Smith's Explorers, who achieved a UK hit in
1980 with the single “Tomahawk Cruise” and released one album, “Last Words Of The Great Explorer” a
year later. Lack of commercial success led to the band being dropped by their record label and their subsequent split. TV re-entered the live arena in 1986 with Cheap, before performing his first gigs as a solo
artist in the early ’90’s. He has gone on to release a succession of albums, including “March Of The Giants”
(1992), “Immortal Rich” (1995), “Generation Y” (1999), “Not A Bad Day” (2003), “Misinformation Overload” (2006), “In The Arms Of My Enemy” (2008), “Coming In To Land” (2011), “The Acoustic Sessions” (2013), and “I Delete” (2014). He has also been involved in a number of collaborations with other
bands, most notably with German superstars Die Toten Hosen, who performed as TV’s backing band on the
album “Useless.” Die Toten Hosen released TV’s latest album “Land Of The Overdose” worldwide on their
label JKP/Warners in late 2018.
Fiercely independent and determinedly embodying the original spirit of punk rock, TV was until recently playing over 100 gigs a year all over the world. His final appearances before the Coronavirus pandemic hit the
UK were in March with punk legends Stiff Little Fingers and The Professionals. Their month-long tour together was called off after only three dates as the country went into lockdown, and shortly afterwards all of
TV’s 56 gigs planned for the rest of 2020 were also cancelled. Not to be daunted, he went straight to work in
his home studio and wrote and recorded eleven new songs inspired by the current crisis. The resulting album, “Lockdown Holiday,” was released on the Easy Action label in the UK at the beginning of 2021. The
album has already been described by critics as the best of his career.