Tom Robinson 'Glad to Be Back' Tour - Band on the Wall 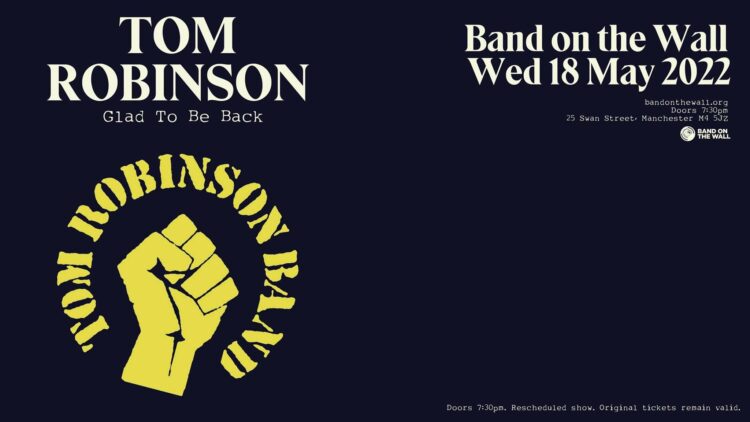 Although many of Tom Robinson's 70s contemporaries such as The Jam, Elvis Costello and Ian Dury have spawned tribute bands, to the best of his knowledge no such act has ever attempted to cover his own back catalogue. Which of those songs, he wondered, would a Tom Robinson tribute band choose to assemble a full-on crowdpleasing set?

There'd have to be the songs co-written with Elton John and Peter Gabriel. Also those unexpected comeback hits of the 1980s such as War Baby and Atmospherics. Not to mention the stone-cold punk-era classics that launched his career: Motorway, Power In The Darkness, Up Against The Wall, Too Good To be True and of course the anthemic Glad To Be Gay.

Catch the veteran broadcaster with his incendiary live band playing highlights from his 45 year career in music. There may not have been a Tom Robinson tribute act until now - but as the chorus of his debut single puts it: "2-4-6-8... ain't never too late".

After a stint in the acoustic trio Café Society, culminating in a 1975 album produced by Ray Davies, Tom founded his own group TRB (Tom Robinson Band) with the late Danny Kustow in 1976. The group were early supporters of Rock Against Racism and the following year their debut single 2-4-6-8 Motorway became one of the landmark singles of the UK punk era.

Mild notoriety followed in 1978 when Radio 1 banned Tom's follow-up anthem "Glad To Be Gay" and subsequent hits included Up Against The Wall and TRB's debut album Power In The Darkness which went gold in the UK and Japan.

His third band Sector 27 was produced by Steve Lillywhite and and went on to play Madison Square Garden in 1981, opening for The Police. After the group's management went bankrupt, Tom fled to Hamburg to avoid going the same way, and then became first UK musician ever to tour East Germany, backed by local musicians.

Tom returned to chart success as a solo artist in 1983 with War Baby and Atmospherics: Listen To The Radio; and co-wrote songs with Peter Gabriel, Elton John and Dan Hartman. In the 1990s, following a one-man tour of Ireland, he signed to Cooking Vinyl records and released three critically acclaimed solo albums.

As a broadcaster Tom won his first Sony Radio Award in 1997 for his BBC London documentary "You've Got To Hide Your Love Away". Ever since helping launch BBC Radio 6 Music in 2002 (and helping save it from closure in 2010) he has worked full time at the station, where he won a second Sony in 2011 and currently presents three shows a week.

This is a standing show.

We know that sometimes you can't make it to a show you've got tickets for. If you would like to pass on your tickets for a sold out show to someone else, we recommend listing them via Twickets, an ethical and secure face value fan-to-fan ticket exchange.

If you are looking for tickets to a sold out show, we strongly advise you DO NOT PURCHASE from people you don't know online - particularly those advertising spares on Facebook, due to a sharp rise in scammers and touts.